A more concise explanation for our current situation with respect to Wuhan flu, crime, policing, fiscal and monetary policy, free speech and many (most) other things going wrong in America would be hard to find. 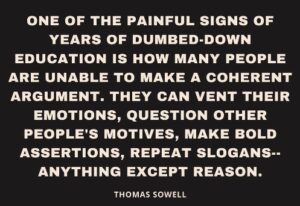 3,000 years of intellectual development, and in the last 50 years we have devolved into FEELINGS!

Seemingly everyone emotes at top speed and top volume, trying to gloss over the pesky little detail that they make no sense. That’s why we are getting nonsensical and contradictory arguments for masking and vaccinations and safe spaces and speech restrictions and how we are going to spend our way out of inflation (huh?) and hundreds of other illogical explanations for a very simple thing…

This is the careful, plodding generations-long plan to destabilize Western culture and society by destroying that which made it great and separated it from all other cultures. All courtesy of a series of communist/socialist/progressive thinkers who may be laughingly wrong about how to run societies, but spot-on when it comes to destroying them.

Here is a fine example of the degradation of our educational systems, our political culture and, sadly, our military. 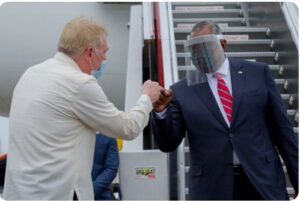 That is our current secretary of defense…a fully vaccinated man wearing an embarrassing talisman against the evil Wuhan flu. What possible reason is he displaying his anti-science ignorance? Is it to show the troops that he too is an idiot? Or is it to bolster the chaotic messaging emerging from D.C. about the Chines Lung Pox?

It is emotional theater coupled with ignorance and stupidity. We used to have men of substance in that seat: men like Edwin Stanton and George Marshall and Henry Stimson and Dick Cheney. Now we have a posturing buffoon who is more interested in systemic racism and domestic terrorism than doing the hard work of running a military.

Can he make a logical argument for wearing a mask, a face shield AND being vaccinated? I doubt it, because it doesn’t exist, and he is the product of the Long March through our institutions. And that is how he is running our nation’s armed forces, with feelings and posturing and feel-good programs that degrade the function of the military…but that’s the point!