But the dilution of American Exceptionalism that began in the mid-1980s with uncontrolled immigration was fueled by its antecedent…the overthrow of American education by the Left. So we are left with a rapidly increasing population, driven by immigrants from countries with no tradition of freedom and the rule of law, and everyone is being taught a carefully truncated view of our roots, complete with guilt for every unequal outcome and sub-optimal result.

And we are left with a country in which its founders are vilified, its history is ruthlessly edited, and its tradition of freedom and liberty is carefully mocked and challenged. 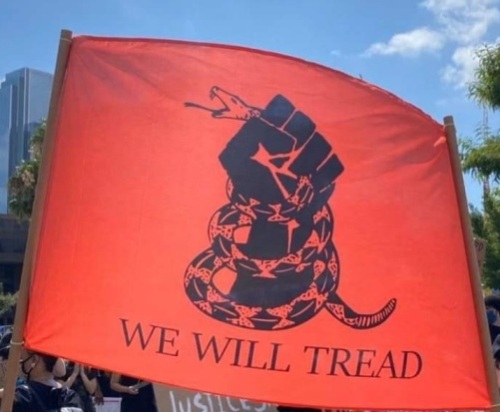 This is a direct and unequivocal challenge to America. The Gadsden flag represents so much of our country that it cannot be separated from it. And anyone with any knowledge of our country’s history understands that the message of that flag is martial. There is no subtlety, no accommodation. The bastardization of it by the current crop of anarcho-fascists is a clear signal, and one that will eventually herald a much more brutal period.

Are we approaching the time during which we all have to make a choice…to defend forcefully the country that we have built on the foundations constructed from the blood and sweat and toil of our ancestors, and reinforced by freedom-loving people from around the world, or to take a knee and watch as it is destroyed, and rebuilt in the image of East Germany or Venezuela or Cuba?