Smug. Out of touch. Elitist. Condescending.

And vile…we mustn’t forget vile. Because the hatred that oozes out of her every botoxed and surgically tightened pore makes me wish for the simpler days of Hillary’s “deplorables.” What a disgusting and dismissive comment this detritus from both coasts has made, apparently without any self awareness that maybe, just maybe, slipping the mask (two masks nowadays) off and letting the twitterverse see her hatred of all things American wasn’t a good idea!

Setting aside the fact that she is dumber than a bag of gravel…does she not understand that we have 50 states, each represented by two senators, and some of those states are small? Like for instance Vermont (smaller than WV!), represented by her landsman Bernie Sanders. Should he not be allowed to vomit out his socialist blather and try to move America forward to the gulags that he and she seem to desire? 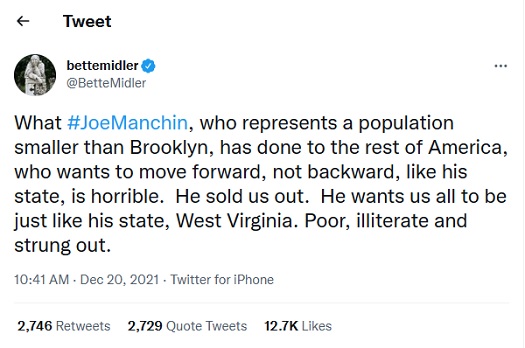 Too bad for West Virginia that they aren’t homosexuals in the bath houses having multiple sex partners and spreading lots of diseases, ending up of course with AIDS. What? Oh dear Bette supported that behavior…she is proud of the role she played!

Despite the way things turned out [with the AIDS crisis], I’m still proud of those days. I feel like I was at the forefront of the gay liberation movement, and I hope I did my part to help it move forward. So, I kind of wear the label of ‘Bathhouse Betty’ with pride.

Imagine being proud of something that led to the deaths of hundreds of thousands of people, and infected thousands of innocents like hemophiliacs, whose lifesaving blood products were contaminated because of people like Bette Midler who insisted that homosexuals be allowed to do absolutely everything uninfected people do, in spite of the catastrophic AIDS rate among them.

So screw off, you disgusting, murdering harridan. And keep your mealy-mouthed apology. Shut your flabby trap and keep your comments about America within your echo chamber of America-hating celebrities and their supporters in the blue enclaves on the coasts.