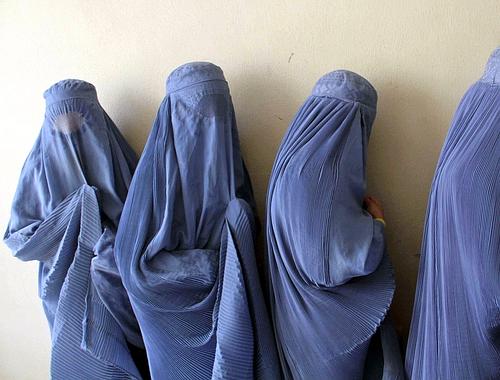 In the latest example of the obvious fact that ISIS is certainly not the JV team, but we are….They have banned the wearing of the full body covering known as the Burqa or Niqab into secure areas.

Daniel Pipes makes some good points here. It is silly to ban Muslim headscarves, because that is simply an article of clothing. Offensive to some? Yes, but not a security threat. The full body coverings are another issue entirely.

A local source in the Iraqi province of Nineveh announced on Friday, September 2, that the [ISIS] terrorist group has released an order, based on which no woman is allowed to be wearing niqab or burqa when entering the security and military centres. The decision, according to the source, came after some fully veiled women killed a number of ISIS commanders and members in the past months.

We of course wouldn’t dream of requiring our secure facilities and areas to be actually….you know….secure, so we have hemmed and hawed and allowed CAIR and the local imams to dictate the terms of our own security protocols by cowering from their bluster. After all, Islam is a religion of peace, and the burqa is the most visible symbol (besides mosques) of Islam. So we must celebrate it instead of recognizing the glaringly obvious fact that it can be used as an entree by terrorists into their targets.

ISIS doesn’t give a shit about what anyone thinks of them, and simply does what they deem to be the rational thing to protect their facilities and personnel.

Compare and contrast those two attitudes toward security…..

One comment to “ISIS Understands The Security Implications Of The Burqa, But We Don’t….”