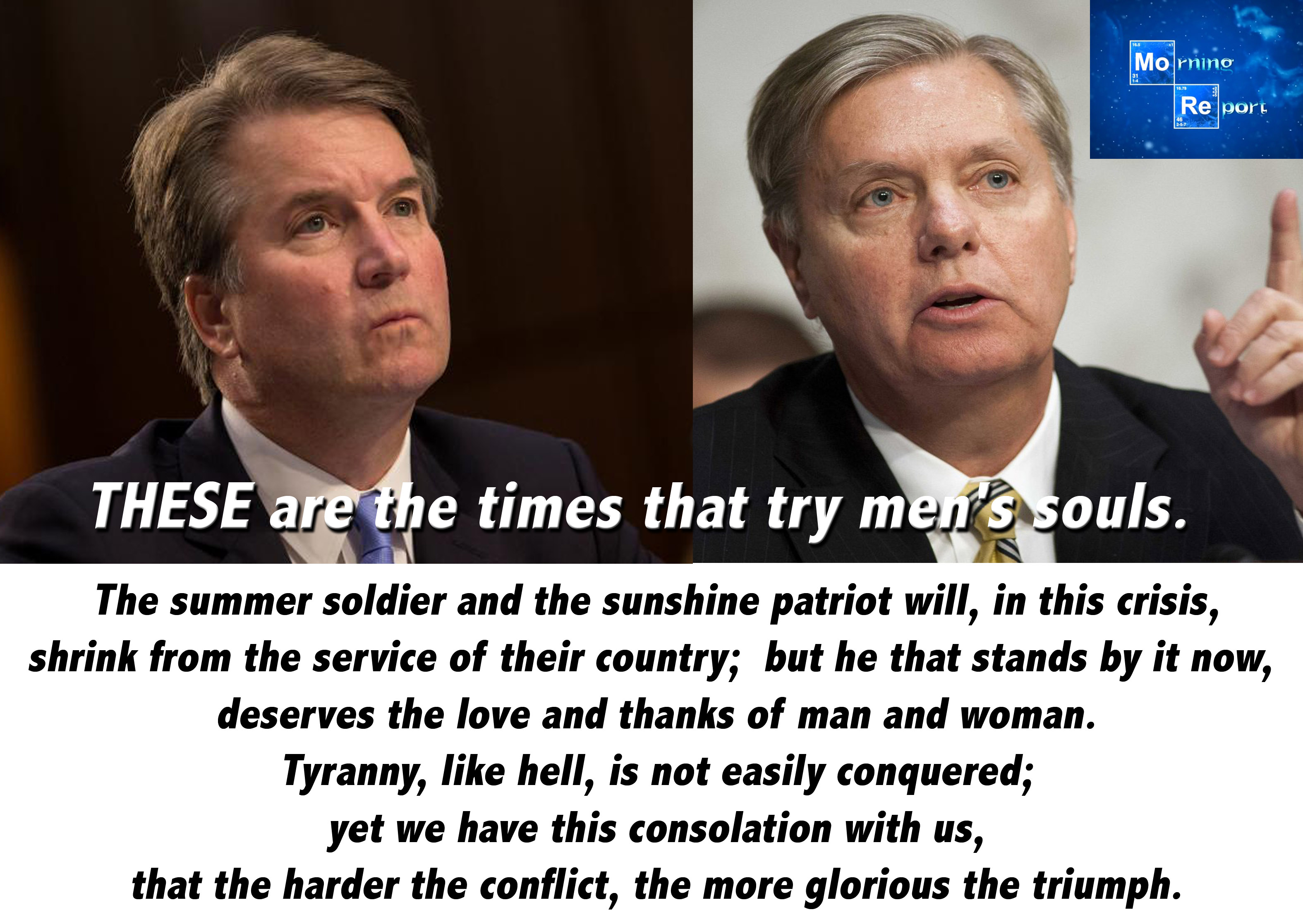 Good morning kids. I’m exhausted, emotionally as well as to a certain extent physically by what we have gone through yesterday, which has been building for the past two weeks and really even longer than that. And yet, at the same time, I am buoyed and uplifted and proud to be an American and, lapsed and imperfect as it may be be, a person faith.

Yesterday, we witnessed what was at once the depths (if we will ever be at that level with the Left) to which our fellow citizens and political leaders as human beings could sink in their shameless lust for power and then given the all too rare privilege to see two examples of the kind of character, righteous indignation and determination to see justice – REAL justice – prevail over naked evil.

Brett Kavanaugh gave one of the most impassioned, heartfelt, emotional and powerful-in-its-truth defenses of his character in utterly shredding the inconsistent, incoherent and completely uncorroborated allegations by Christine Blasey Ford and her handlers in the Democrat Party and media. He also proved his mettle, his decency, his unwavering faith and love of G-d and his family, and burnished an already proven record of temperament and character that is exactly what is needed in any judge, especially one who G-d-willing will sit on the highest court in the land.

But perhaps the man of the hour, who like so many people in times of crisis somehow rises to the occasion and rides in from out of nowhere to save the day was Senator Lindsay Graham. Over the years that I have commented here and especially since becoming a co-blogger, I have attacked and ridiculed him mercilessly. And his record shows he deserved it. But his rousing defense of Brett Kavanaugh, which was in fact in the form of an unrelenting broadside at the Democrats on the committee, the media and the unseen forces behind this last second smear was real. He said things that needed to be said and in a way that underscored what is really at stake here:

“Boy, you all want power. God, I hope you never get it.

Amen to that. (he must’ve seen yesterday’s Morning Report!) Looking back, I think the first time I became truly aware of what the Democrat party was all about was what they did to Clarence Thomas. And nearly 10 years to the day came 9/11 and then things crystallized but that is another story for another time. Whatever happens now, while I am cheering Lindsay Graham I hope, like Clarence Thomas, 9/11 and now this, I hope perhaps that he takes this as a lesson as to what his “colleagues across the aisle” are really all about. Every goddam day when he sees them. DC being what it is, maybe that is too much to hope for. But I saw something in him, unlikely as an agent for good as he might’ve been day before yesterday, that was real. I hope he stays that way for the rest of his career and becomes one of the good guys. We have so few and we need all we can get. And like the Thomas hearings, I hope this too inspires LIVs and others, perhaps disaffected Democrats to see what the party they either ignore or support is really all about.

It’s hard for me to really write more about this because odd as it sounds I’m beginning to get a bit emotional thinking about this. Imagine that. Lindsay Graham. The good Roger Simon, who was also fired up yesterday, has collected his thoughts in a great essay in the links. Lots of other good stuff from a bevy of the best as well. Come what may, we might have witnessed a truly historical moment yesterday courtesy of Brett Kavanaugh and Lindsey Graham.

The big news is Bob Corker, who was one of the swing votes is now firmly in the “yes” column. And considering his anti-Trump pedigree, could he perhaps sway fellow anti-Trumper Jeff Flake to give the thumbs up? We shall see. The committee vote is scheduled for mid morning and then if they get the votes, it goes to the full Senate I believe on Monday – which is the opening day for the next Supreme Court session. Perhaps they’ll move for a vote over the weekend so they can seat Kavanaugh? Those in the know about the procedures please weigh in. From a political standpoint, the Dems have now dug themselves beneath the Marianas Trench and evidently are not only not stopping but digging faster; they are now vowing to harass Kavanaugh with endless investigations and try to impeach him should he be seated. In related news, the American Bar Association is one of those institutions where the left has sucked the life out of it and now wearing it as an Iowahawk-style skin suit, so fuck them too. Maizie “Dragon Lady” Hirono whores herself for campaign bucks and then does a 180, Sally Kohn got pinched protesting at SCOTUS, Beto “Agarn” O’Rourke is a joke and the Walk-Away movement is coming to DC, not doubt to be set upon by black-shirted Soros rent-a-thugs.

Lastly, while all this is going, the sneaky goniffs in the Senate passed a pork-laden sham of an ass-rape of a budget that does not fund the border wall, and continues the genocide of black babies and others in the womb. Maybe Lindsay Graham can direct his fire in this direction as well.