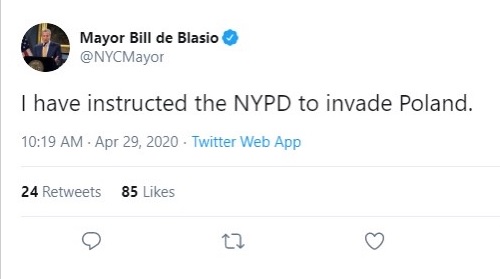 de Blasio is a double whammy…he is of course a big time Jew-hater, and also a garden variety power-mad politician, albeit with a large mandate…New York City. But the biggest city in the country or a small town…most of these politicians are the same…they love to flex their muscles by dictating how we live our lives. And those orders come at the point of a gun…metaphorically in most cases but here in the People’s Republic Of New Jersey the jack-booted thugs — the wielders of state-sanctioned violence — have been dispatched to violate our rights.

And let us not pretend that this exhibition of state power and coercion is not on a continuum. There is a clear path from violating one seemingly minor right to violating the ones that you hold dear. Sure, those weird looking Hasidic Jews probably won’t fight back, so they are an easy target. Besides, they are Jews, so why not make an example of them? It’s just a funeral, or a wedding, or some strange religious ritual that most of us find odd.

But my stupid and ignorant governor has closed outdoor shooting ranges in direct and obvious violation of the 1st and 2nd Amendments to the United States Constitution. Setting aside the violation of our rights, outdoor shooting ranges seem tailor-made for social distancing. So why close them? Naked exercise of power plus a shot at the 2nd Amendment is just too tempting for any of these modern-day fascists to resist.

Closing “non-essential” businesses is another favorite of the power-mad maniacs in our governors’ mansions. Who gets to decide what is essential? The popcorn stand at the local ballpark is probably just as essential to its owners as the produce market, but one is forced to close and the other isn’t? What about the state lotteries? Why are they still running? It’s state-sponsored gambling so it’s okay, but casinos must close?

Hitler and Stalin and Mao didn’t start with mass killings. They began by desensitizing the people to their goals. “Oh, it’s just a mask,” or, “nobody really needs to go to the range” seem so benign, but it is the beginning, not the end.
***
And another thing…don’t pay any attention to the arrant bullshit being flung about by the ignorant, jingoistic, profoundly biased media…we are testing for Sino-Lung-Rot on an almost unbelievable scale. According to these data, we have performed almost 7,000,000 tests, far more than any other country. And when one considers that we have a far less dense population compared to other hard-hit countries (I am ignoring the data from Russia because I don’t believe anything they say), and vast reaches of America that have very little Kung Flu, it is even more impressive.

Those tests, especially the ones done in NYC indicate a very high level of previous infection…on the order of 20%+. Even assuming that the numbers in NYC are significantly more than the rest of the country (let us assume 5x more), the death rate drops to 0.5%, which sounds suspiciously like a bad flu season. You know, like the really bad one in 1968 that killed 100,000 Americans (or 165,000 if corrected for our current population). Does anyone remember 1968? Did we shut down the country?