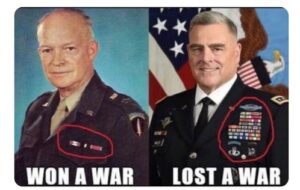 The United States Constitution is clear. The President is the commander in chief of the armed forces. The framers of the Constitution knew what they were doing…ensuring civilian control of our military, which meant ultimately that the people controlled the military.

The President shall be Commander in Chief of the Army and Navy of the United States, and of the Militia of the several States, when called into the actual Service of the United States; he may require the Opinion, in writing, of the principal Officer in each of the executive Departments, upon any Subject relating to the Duties of their respective Offices, and he shall have Power to grant Reprieves and Pardons for Offences against the United States, except in Cases of Impeachment.

But three generations of a slow and steady degradation of our officers corps, primarily those who are political appointees, has created a situation similar to the civilian Deep StateTM, in which unelected and unaccountable senior officers act in a manner counter to the express wishes of the Commander in Chief.

In an interview with Fox News Digital, E. Casey Wardynski, a former assistant secretary of the Army for Manpower and Reserve Affairs under the Trump administration, accused high-ranking military officials Milley and McConville of making statements that insinuated they were calling the shots.

But the current chairman of the joint chiefs seems to have done both! And he doesn’t even have a long and successful record on which to base his disagreements with civilian authority. It is becoming clear that it is simply arrogance coupled with stupidity.

Milley is a hack. There is no other way to describe him. His military decisions were catastrophically bad, and his leadership may be even worse…pushing an aggressive post-modern lunacy on the military in direct opposition to its clearly understood function. Placing divisive racial theories at the heart of the nation’s military is a recipe for disaster. But unlike many of his predecessors, he has no martial spirit, no honor, and is driven by a craven desire for power and control, which has come at the expense of many good men and has resulted in America’s defeat in Afghanistan.

For that alone he should resign in disgrace, but his efforts to undermine his superior, the President of The United States, is even more serious, and requires an investigation, court martial, and if found guilty, prison.