Good morning kids. Tuesday and once again, an incident has occurred that makes me ponder the question, how are we supposed to move forward as a nation when a significant percentage of its population either uses violence, approves of the violence and worse, represent the party/political movement that foments the violence to gain and maintain power?

A volunteer for Sen. Marco Rubio (R-FL) was brutally attacked while canvassing for the campaign in Hialeah, Florida, leaving him with a broken jaw and internal bleeding.

According to the senator, who is facing off against Democrat Rep. Val Demings (D-FL) in roughly two weeks, four individuals attacked the canvasser, allegedly telling him that Republicans were not allowed in their neighborhood. The man, who will also require facial reconstruction surgery, was wearing a shirt supporting Rubio and hat supporting Gov. Ron DeSantis (R). . .

. . . The attack comes several weeks after [so-called quote-unquote “president”] Biden identified MAGA Republicans as a major “threat to the country”. . .

. . . Notably, Rep. Charlie Crist (D-FL), who is challenging DeSantis in this year’s gubernatorial race, praised Biden, telling his supporters that he was “so damn proud” of Biden for demonizing millions of Americans:

“How many of you saw Biden’s speech last night on national TV? God love him. He told it straight… The president laid it out, he didn’t hold back and I am so damn proud of him for it.”

Charlie Crist is a joke. His praise for the demonization of half the country at the highest level – essentially a green light to commit acts of violence with the approval and at the behest of the junta in power – is not. 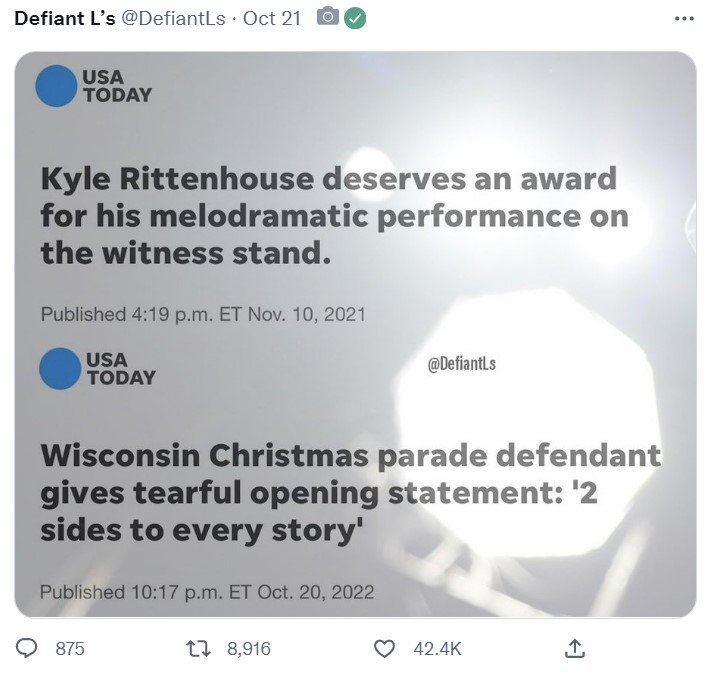 For those who have been living on another planet, or get their “news” from MSNBC, Kyle Rittenhouse was attempting to prevent the city of Kenosha, WI from suffering the same fate as several dozen other cities during 2020’s Summer of Love 2: Mostly Peaceful Rioting Boogaloo when he was forced to shoot and kill an Antifa terrorist in absolute self defense.

The rioting itself, a Leftist-orchestrated terror campaign that went hand in hand with the lockdowns and sabotaging of voter integrity laws as the means to affect the 2020 election, was brought on by the regrettable yet understandable death of a black criminal at the hands of white cops while resisting arrest, and who most likely died because he swallowed his stash of crystal meth and had COPD.

Darrel Brooks on the other hand, hopped up on a BLM/LBJ speedball mainlined right into his brain mows down a crowd of innocent people at a Christmas parade (well, when you’re white you’re not really innocent, are you?) and is all but beatified in the media. That is, when they are forced to cover the story.

But I digress. It’s madness. Here we are concerned, and rightly so, about elections and yet we are quite literally at the stage of being at each other’s throats to decide the direction this nation will take. Check that: WE are not at each other’s throats. THEY are at OUR throat, and there isn’t a damn thing we can do about it lest we suffer the same fate that Kyle Rittenhouse almost suffered. And he acted in self-defense. The want us to lash out so they can use it as a pretext to cancel the elections, declare martial law, and you name it. We haven’t, and it is an absolute testament to our civility and yearning to live and let live that there hasn’t been an actual act of unprovoked violence aimed at a Leftist. Yet. That’s why parents at school board meetings, a handful of drunken goofs up in Michigan shooting their mouths off entrapped by the FBI, ditto the J6 political prisoners, and the phantom armies of “white supremacist insurrectionists” all have to be created out of whole cloth to give the illusion that there is a “clear and present danger” to “our precious democracy” (*vomit).

That said, one day someone somewhere is going to snap, brought about by some outrage or circumstance that befalls said individual, as a result of the criminal actions of this criminal junta and its acolytes, enablers and allies in and out of government. Fired for refusing the Fauci Fix, objecting to drag queen story hour, DEI/DIE, “denying” climate change, the 82 million votes for the Delaware demento in 2020, savings wiped out due to said firing coupled with the cratering economy, etc. etc. It could happen. Is it inevitable? Perhaps not. Hence, the entrapment stings of the FBI up to and including the plot to take down President Trump via Russian collusion and now trumped up charges of insurrection on January 6, when it was those bringing the charges that are the real insurrectionists.

So, we win the midterms and even the whole shooting match (pun kind of sort of unintended) in ’24. We are still divided into two irreconcilable camps. That said, thanks to Trump and the Democrat-Left and Deep State’s complete exposing of who and what they are (mostly brought about by the coming of Trump), many people are jumping ship or at a minimum are having their eyes opened and not liking what they see.

It still leaves both a feral bureaucracy and corrupt system intact that will continue to lord over us and worse, a vast industry of mass brainwashing disguised as academia that will crank out obedient cogs in the machine of our own destruction.

It exploits social-justice politics and transforms it into social-justice consumerism — and ultimately, investor profit. Companies purporting to care about “progressive values” are really doing nothing more than striking a superficial pose meant to signal virtue while distracting from any company’s true motive: financial gain for shareholders.

. . . But in the age of armchair, keyboard activism, woke capitalism lets consumers badge themselves as progressive activists without actually having to do anything. It’s magic!

There is, of course, another piece of the puzzle, largely hidden from the public — the degree to which these CEOs are influenced by their Gen Z offspring.

Many have kids who are attending highly woke private elementary schools and high schools — places like Children’s Day in San Francisco, Trinity in New York and Oakwood in Los Angeles. These kids have been coddled and inculcated into gender ideology and critical race theory while denouncing white supremacy at their mostly white — and rich — fancy private schools.

They feel guilty about being white and privileged because they’ve been told they need to, and maybe they do need to feel a bit of gratitude for their “born on third base” status, but they are out to prove their worthiness by putting a woke sheen on their desire to stay rich and privileged.

And so, they are all too eager to prove that they are virtuous and willing to “do the work” to have a raised social conscience. That means needing to virtue signal even harder to prove one’s seriousness. Usually “the work” entails not that much work at all, but necessitates ousting others for wrongthink.

Witches must be burned at the stake, after all.

The kids go on to college, and graduate after four years of building safe spaces and protesting “micro-aggressions.” Many believe that whenever they feel slightly unhappy, it is obviously the result of some grave injustice. And they feel justified in demanding punishment for anyone who offends them. They take this attitude with them as they enter the workforce. . .

. . . we better listen up, or they won’t visit us. Worse, they’ll cancel us. Many of us are desperate to prove that we do not deserve this dismissive “OK Boomer” meme. We are “with it,” serious-minded “virtue”-osos, too.

Today’s executives reared these kids with an “I’m not your dad, I’m your friend” parenting philosophy, and they chase their children’s approval. They want to impress their woke kids with their own progressive bona fides. They want to be cool — peers not parents — in the eyes of their offspring, valued not for the materials goods that they provide but for the values that they champion.

And now these young people are populating the companies led by “I’m not your dad, I’m your friend” CEOs. Surrounded by this cohort, CEOs are awash in approval and praise — but only if they can find a way to pander to the generation’s every shifting demand. . .

. . . These 20- and 30-somethings are ideological terrorists, policing their peers and elders relentlessly. They are “omnipotent moral busybodies” ridding the world of evil, and they will not rest until they exorcise immorality for the good of those being exorcised.

But as C.S. Lewis said, “I’d rather live under robber barons than under omnipotent moral busybodies.” Amen to that.

Why do they do it? Because, as author and economist Thomas Sowell has said, those “who are contributing nothing to society, except their constant criticisms, can feel both intellectually and morally superior.”

By doing close to nothing — wearing the right T-shirt, affixing one’s social media profile with the right badge (for example, “I am vaccinated” or “I stand with Ukraine”) and by cancelling the “wrong” people by generating outrage with a finger tap, they are saved.

The author of that piece is “former Levi’s brand president Jennifer Sey [who] was forced out of the company due to pressure to stop speaking out about [Chinese] COVID-19 school closures.” She identifies the problem without specifically naming it: the brainwashing of our children from pre-school all the way through post-grad.

Aside from corporate executives, look at places like the DOJ, FBI, CIA and now the DOD and all the rest of the institutions that are supposed to be the impartial arbiters and referees that keep society on an even keel and keep us safe. They felt zero compunction about sabotaging Trump’s campaign, then his administration and even our national security so as to remove him from office as quickly as possible “by any means necessary.” They too are not only the products of American academia but its most elite institutions.

While voting is vitally important, we are so dysfunctional and unrecognizable to what we were even a generation ago, and those were the Clinton years mind you, that in the long run we are not voting our way out of it. Again, voting staves off disaster, and perhaps over time with enough MAGA candidates gaining traction mostly because of the catastrophes brought about by Leftists and RINOs, it will make a significant difference.

But unless and until we can deprogram and de-Nazify everyone from this Darrell Brooks all the way on up to the fools in the C-suites, there will be trouble in River City for the foreseeable future.

ABOVE THE FOLD, BREAKING, NOTEWORTHY

AMERICA AND THE WORLD IMPRISONED: CHINESE CORONAVIRUS FICTIONS AND FACTS

EDUCATION, AND WHAT PASSES FOR IT

THE 2020 ELECTION HEIST AND AFTERMATH

NOTE: The opinions expressed in the links may or may not reflect my own. I include them because of their relevance to the discussion of a particular issue.